Miquita Oliver (born 25 April 1984) is a British television presenter and radio personality. She co-hosted Channel 4’s Popworld from 2001-2006 and continues to present on T4, as well as having her own show, The Month With Miquita, on 4Music. She has also worked in radio, hosting shows on BBC Radio 1 and 1Xtra. 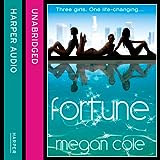 Fortune
Buy on Amazon
Bestseller No. 2