Krzysztof Ibisz (born 25 February 1965 in Warsaw) is a Polish game show host and television personality. He was a member of Polish Beer-Lovers’ Party and deputy in Polish Sejm from 1991 to 1993. Ibisz won various awards as the popular TV personality. He is known as forever young, what is popular on jokes. He wrote Jak dobrze wyglŽ?daŽ? po 40-tce (How to look good after 40). 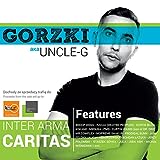 Moomins, The [Region Free] (IMPORT) (No English version)
Buy on Amazon
Bestseller No. 4