John Joseph Laurinaitis (born July 31, 1965) is the Executive Vice President of Talent Relations for WWE and appears on WWE’s Raw Brand as interim General Manager. He was previously a professional wrestler under the ring name Johnny Ace, and wrestled for such promotions as the National Wrestling Alliance (NWA) and All Japan Pro Wrestling (AJPW). He is credited as the inventor of the Cutter” maneuver dubbed by Laurinaitis as the “Ace Crusher”. He is also the younger brother of Joe Laurinaitis (Road Warrior Animal; one half of the wrestling tag team The Road Warriors) and the uncle of James Laurinaitis former Ohio State standout and currently a linebacker for the St. Louis Rams. Prior to joining WWE Laurinaitis worked as an executive for World Championship Wrestling (WCW). “ 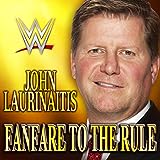 WWE: Fanfare to the Rule (John Laurinaitis)
Buy on Amazon
Bestseller No. 3

WWE: Fanfare to the Rule (John Laurinaitis)
Buy on Amazon
Bestseller No. 5