19 Kids and Counting (formerly 17 Kids and Counting and 18 Kids and Counting), rendered graphically as 19 Kids & Counting in its onscreen logo, is an American reality television show on TLC. The show is about the Duggar family, which consists of parents Jim Bob and Michelle Duggar and their 19 childrenƒ??nine girls and ten boys (including two sets of twins), all of whose names begin with the letter J”. The series began on September 29 2008. “

A Love That Multiplies: An Up-Close View of How They Make It Work
Buy on Amazon
Bestseller No. 2

18 Kids and Counting: Season 2
Buy on Amazon
Bestseller No. 3 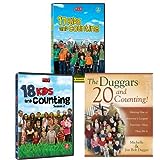