Beyond Uhura - Star Trek and Other Memories
Buy on Amazon
Bestseller No. 5 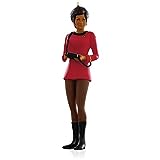