Anthony ‘Tony’ Stonem is a fictional character from the British television series Skins. He is portrayed by Nicholas Hoult. In the first series he is considered an anti-hero, and in some respects his actions are very antagonistic. However, this changes in the second series as he becomes a victim of a subdural hematoma and, as a result, becomes more vulnerable. 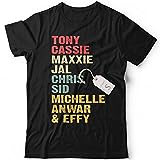