Susan Pevensie is a fictional character in C. S. Lewis’ Chronicles of Narnia series. Susan is the elder sister and the second eldest Pevensie child. She appears in three of the seven books ƒ?? as a child in The Lion, the Witch and the Wardrobe and Prince Caspian, and as an adult in The Horse and His Boy. She is mentioned in The Voyage of the Dawn Treader and The Last Battle. During her reign at the Narnian capital of Cair Paravel, she is known as Queen Susan the Gentle or Queen Susan of the horn. She was the only Pevensie that survived the train wreck (because she was not on the train or at the station) on Earth which sent the others to Narnia after the Last Battle.

The Light Between Worlds
Buy on Amazon
Bestseller No. 2 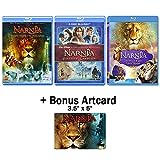 The Chronicles of Narnia: Complete Movie Trilogy Blu-ray Bundle (The Lion, the Witch and the Wardrobe / Prince Caspian / Voyage of the Dawn Treader) + Bonus Art Card
Buy on Amazon
SaleBestseller No. 3

The Chronicles of Narnia Collector's Edition (Radio Theatre)
Buy on Amazon
Bestseller No. 4

McDonald's 2005 Narnia The Lion, The Witch And The Wardrobe Susan Pevensie And The Wolves Toy #6
Buy on Amazon
Bestseller No. 10