Noah Bennet, also known as the man in Horn-Rimmed Glasses (aka HRG) or simply Mr. Bennet, is a fictional character from the NBC drama Heroes played by Jack Coleman. The role was initially recurring, but became regular as of the 11th episode. His first name was not revealed until How to Stop an Exploding Man” the first season finale. “

Before the Fall
Buy on Amazon
Bestseller No. 2

Falling Like This [VHS]
Buy on Amazon
Bestseller No. 4 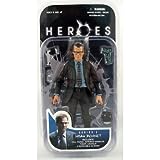