Ms. Marvel is the name of a fictional character appearing in comic books published by Marvel Comics. Created by writer Roy Thomas and designed by artist Gene Colan, the non-powered Carol Danvers debuted as a member of the US Air Force in Marvel Super-Heroes #13 (1968) and as Ms. Marvel ƒ?? a fusion of alien Kree and human genes ƒ?? in Ms. Marvel #1 (Jan. 1977).

Ms. Marvel Volume 1: No Normal
Buy on Amazon
Bestseller No. 2 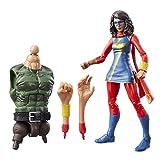