Mr. Bean is a hilarious bachelor living in England. His everyday tasks seem to get him in and out of hilarious problems. Mr. Bean is always accidentally causing wacky antics every way he turns. Mr. Bean means well, but can sometimes be ignorant and very inconsiderate. Mr. Bean is like a child in a man’s body. It is revealed in Bean (1997) that he works in a museum, and when asked what he does there, he replies: I Sit and look at the paintings”. When we first meet Mr. Bean it appears he is taking some sort of post-secondary educational exam. Throughout the series Mr. Bean is always seen with his two companions: his Mini Car and his teddy. “

Pizza
Buy on Amazon
Bestseller No. 4

In The Wild
Buy on Amazon
Bestseller No. 6

Bean
Buy on Amazon
Bestseller No. 7 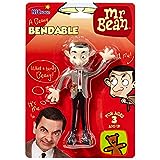