Mohinder Suresh is a fictional character on the NBC drama Heroes, portrayed by Sendhil Ramamurthy. He is from Chennai, Tamil Nadu, India and is a genetics professor at the University of Madras who holds a PhD in parapsychology. He is attempting to find the truth behind the sudden death of his father, Chandra Suresh, and to continue his father’s research finding the ‘superhuman’ beings on Earth. 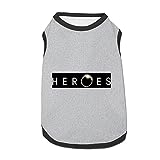 2008 Heroes Series One #7 Mohinder Suresh
Buy on Amazon
Bestseller No. 8