Mater (voiced by Larry the Cable Guy) was inspired by a 1951 International Harvester tow truck but bears more of a resemblance to a 1955-57 Chevrolet or GMC; the actual inspiration may be the 1955-56 version since the hood which Mater recovers at the end of the film after a twenty-year absence lacks the gunsights” of the 1957 model. Mater runs “Tow Mater Towing and Salvage.” Along with the movie he also stars in an animated short Mater and the Ghostlight and acts as an announcer in the Cars video game. He speaks with a thick Southern accent with a bit of hillbilly twang and often misspells words or uses incorrect syntax. Mater is also the (self-proclaimed) world champion backwards driver. He attributes his skill to his rear-view mirrors and his own philosophy: “Don’t need to know where I’m going just need to know where I’ve been.” In the movie Mater befriends and supports Lightning throughout his adventure in Radiator Springs. “ 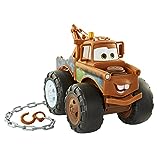 Mater and the Ghostlight - Pixar Short
Buy on Amazon
Bestseller No. 6