Dirt (styled d!rt for logos) was an American television serial broadcast on the FX network. It premiered on January 2, 2007 and starred Courteney Cox as Lucy Spiller, the editor-in-chief of the first-of-its-kind glossy tabloid” magazine DirtNow which was previously two separate publications: drrt (a tabloid) and Now (a glossy magazine with a more respectable reputation.). “ 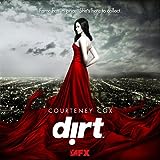 Welcome to Normal
Buy on Amazon