Lex Luthor is a fictional character, a supervillain that appears in comic books published by DC Comics. He is the archenemy of Superman and first appeared in Action Comics #23 (Apr. 1940), and was created by Jerry Siegel and Joe Shuster. Luthor is described as a power-mad evil scientist” of incredible technological prowess. His goals typically center on killing Superman usually as a stepping stone to world domination. Though he periodically wears a powered exoskeleton Luthor has traditionally lacked superpowers or a dual identity. “

Luthor
Buy on Amazon
SaleBestseller No. 5 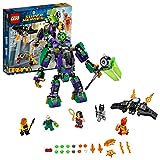