Legolas is a character in J. R. R. Tolkien’s legendarium, featured in The Lord of the Rings. He is an Elf from the Woodland Realm and one of nine members of the Fellowship of the Ring.Legolas was the son of Thranduil, King of the Woodland Realm of Northern Mirkwood, who appears as the Elvenking” in The Hobbit. Thranduil ruled over the Silvan Elves or “Wood-elves” of Mirkwood.Although he lived among the Silvan Elves Legolas was strictly not one himself. His father Thranduil had originally come from Lindon; he and his son were actually Sindar or “Grey Elves” called in the singular Sinda: “Sindarin” was their language. A small minority of Sindar (headed by Thranduil by the time of The Hobbit) ruled the predominantly Silvan Woodland Realm. Legolas’ mother is never mentioned. “

Lord of The Rings: Legolas Greenleaf and Tauriel Plastic Kit
Buy on Amazon
Bestseller No. 2 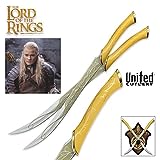 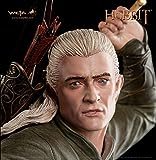 The Hobbit Legolas Greenleaf An Unexpected Journey 3.73" Figure
Buy on Amazon
Bestseller No. 5 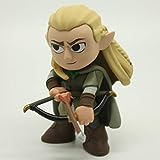 The Hobbit: The Desolation of Smaug - Legolas Greenleaf Lithograph 16 x 20
Buy on Amazon