John Herbert Dillinger Jr. (June 22, 1903 ƒ?? July 22, 1934) was an American bank robber in the Midwest during the early 1930s. He was considered to be a dangerous criminal who was involved in the deaths of several police officers, robbed at least two dozen banks and four police stations, escaped from jail twice and was idolized by some as a modern-day Robin Hood. The exploits of Dillinger and his gang, along with those of other criminals of the Great Depression such as Bonnie and Clyde and Ma Barker, dominated the attention of the American press and its readers during what is sometimes referred to as the public enemy era (1931ƒ??1935), a period which led to the development of the modern, more sophisticated Federal Bureau of Investigation.

John Dillinger: The Life and Death of America's First Celebrity Criminal
Buy on Amazon
Bestseller No. 2

Dillinger
Buy on Amazon
SaleBestseller No. 3

John Dillinger Slept Here: A Crooks' Tour of Crime and Corruption in St. Paul, 1920-1936
Buy on Amazon
Bestseller No. 4

Public Enemies: America's Greatest Crime Wave and the Birth of the FBI, 1933-34
Buy on Amazon
Bestseller No. 7 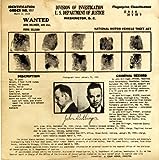 Dillinger And Capone
Buy on Amazon
SaleBestseller No. 9