Jean ValJean(c. 1769ƒ??1833) is a fictional character who is the protagonist of Victor Hugo’s 1862 novel Les Mis??rables. Hugo depicts the character’s 19-year-long struggle with the law for stealing bread, so he could feed his sister’s children (5 years for the theft, 14 years for four attempted escapes and two years for fighting back during one escape attempt) during a time of economic depression. Valjean, along with his nemesis, Police Inspector Javert, who relentlessly pursues Valjean, have become archetypal characters in literary culture. Valjean is also known as Monsier Madeleine, Monsieur Le Mayor, Ultime Fauchelevent, Monsieur Leblanc, Urbain Fabre, 24601 and 9430.

Episode 1
Buy on Amazon
Bestseller No. 2 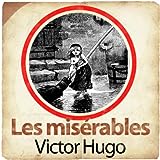 All You Can Lose is Your Heart
Buy on Amazon