Inspector G. Lestrade or Mr. Lestrade is a fictional character, a Scotland Yard detective appearing in several of the Sherlock Holmes stories by Arthur Conan Doyle. Doyle used the name of a friend from his days at the University of Edinburgh, a Saint Lucian medical student by the name of Joseph Alexandre Lestrade. In The Adventure of the Cardboard Box” Lestrade’s first initial is revealed to be G. Lestrade is described as “a lean ferret-like man furtive and sly-looking in A Study in Scarlet and a little sallow rat-faced dark-eyed fellow” in “The Boscombe Valley Mystery”. He was summarised by H. Paul Jeffers in the following words: “ 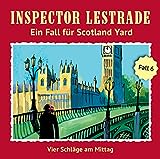