Harvey was a mortal boy whose full name was Harvey Dwight Kinkle. As revealed in an episode, he has some Slavic ancestry. He was close friends with Sabrina, Jenny, Valerie and Brad. Harvey was Sabrina’s boyfriend until the 4th season, when he discovered that she was a witch in the season finale. The reason for this was that Sabrina had cast too many spells on him over the years and when the limit was reached his memory was no longer erased after each spell was reversed.

Chilling Adventures of Sabrina #8
Buy on Amazon
Bestseller No. 2

Sabrina the Teenage Witch Harvey Kinkle Doll by Kenner by Kenner
Buy on Amazon
Bestseller No. 7 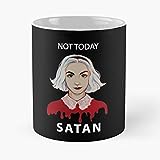