Freddy Krueger is a fictional character from the A Nightmare on Elm Street series of horror films. He first appears in Wes Craven’s A Nightmare on Elm Street (1984) as a disfigured dream stalker who uses a glove armed with razors to kill his victims in their dreams, which ultimately results in their death in the real world. However, whenever he is put into the real world, he has normal human strength and vulnerability. He was created by Wes Craven, and has been consistently portrayed by Robert Englund since his first appearance. In the remake, however, Krueger is now portrayed by Academy Award-nominee Jackie Earle Haley. 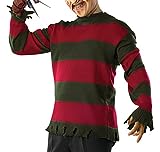 Freddy vs. Jason
Buy on Amazon
SaleBestseller No. 7 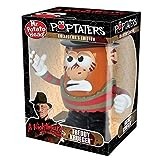