Forrest Gump (born June 6, 1944 in Greenbow, Alabama) is a fictional character who first appears in the 1986 eponymous novel by Winston Groom. Forrest Gump also appeared on screen in the 1994 film of the same name directed by Robert Zemeckis. Gump was portrayed as a child by Michael Conner Humphreys and portrayed as an adult by Tom Hanks, who won an Academy Award for the role. The portrayal of Forrest in the original novel is notably different from the portrayal in the film. He later reappears in the 1995 novel Gump and Co.

The Shawshank Redemption
Buy on Amazon
Bestseller No. 7

Cast Away
Buy on Amazon
Bestseller No. 10 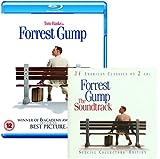