Ethan is introduced as a lacrosse star and top athlete of West Beverly Hills High. He has a brother who is autistic. He dates Naomi at the beginning of season 1, although the pair break up several times before ending their relationship permanently. He and Dixon are rivals at first, but eventually become friends. Although Ethan is attracted to Annie and kissed her two summers before the start of the show, he does not become her boyfriend until There Is No Place Like Homecoming.” Ethan seems to carry traits of Dylan McKay from the original series since he dated both Annie and Naomi just like Dylan dated both Kelly and Brenda. In “By Accident” he is involved in a car accident. Ethan’s self-absorption is revealed when he does not recognize Rhonda the girl in the other car even though they are in the same French class. He befriends Rhonda in an attempt to reform. “

On a Tuesday
Buy on Amazon
Bestseller No. 6 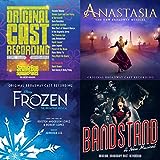 Showtunes For Work
Buy on Amazon
SaleBestseller No. 8