Tanay Hemant Chheda (born 27 June 1996) is an Indian young actor. He has worked in the critically acclaimed film Slumdog Millionaire (2008), for which he has won the Screen Actors Guild Award for Outstanding Performance by a Cast in a Motion Picture and received a nomination for Best Ensemble at the Black Reel Awards of 2008.

Irresponsible
Buy on Amazon
Bestseller No. 2 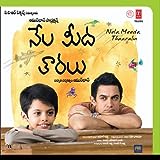 My Name Is Khan (Region Free Blu-ray)
Buy on Amazon
Bestseller No. 5