Saverio Guerra (born August 25, 1964) is an American actor. He is known for playing Bob in Becker, which he played from 1998–2003. He has also starred in Temporarily Yours (1997) as Caesar Santos and EZ Streets (1996) as Sammy Feathers and had a recurring role as Willy in Buffy the Vampire Slayer. He wrote a one-man show called “Adoption” about his own personal ordeal of coming to family.

Lucky You
Buy on Amazon
SaleBestseller No. 8 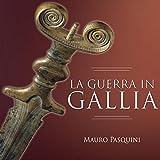 La guerra in Gallia
Buy on Amazon
SaleBestseller No. 9