Nick Thune was born in Seattle and lived there until he was 24, when he moved to Los Angeles to pursue his comedy career. He has been getting steadily more popular over the past few years, appearing at the Laugh Factory, on Letterman and in several short comedy films. He has also had cameo appearances in several major films, including Knocked Up. 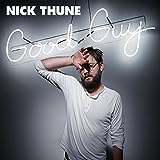 People You May Know
Buy on Amazon
Bestseller No. 9

This Is Happening
Buy on Amazon
Bestseller No. 10