Alejandro “Alex” Barahona (born Madrid, December 11, 1980) is a Spanish actor. On the small screen was released in the series Los Serrano in the role of Alex (friend and classmate of Mark and Eva). His last known work on television was in the series Physics and Chemistry in the role of Bert, which left in its sixth season, but will return in the last chapter.

Alpha
Buy on Amazon
Bestseller No. 3 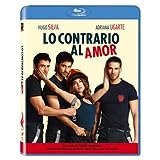 The Opposite of Love [Region B]
Buy on Amazon
Bestseller No. 5