Alan Sidney Patrick Rickman (born February 21, 1946) is an English film, television and stage actor. He has won the Emmy, Golden Globe, BAFTA and Screen Actors Guild Awards, and is perhaps best known to American film audiences for his roles as Severus Snape in the Harry Potter films and Hans Gruber in Die Hard. He also featured prominently as the Sheriff of Nottingham in the 1991 blockbuster, Robin Hood: Prince of Thieves. More recently, Rickman portrayed Judge Turpin in Tim Burton’s Sweeney Todd: The Demon Barber of Fleet Street, a role that brought forth forecasts of his first Oscar nomination (although he was not nominated).

CBGB
Buy on Amazon
Bestseller No. 2

Quigley Down Under
Buy on Amazon
Bestseller No. 6

Sense and Sensibility
Buy on Amazon
SaleBestseller No. 8 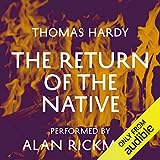 The Return of the Native
Buy on Amazon
Bestseller No. 9